Pandoras Box brings the art of Goya to life

The famous Spanish painter Francisco de Goya is unquestionably one of the most influential artists of the eighteenth and nineteenth century. A true innovator, his trailblazing work contained elements foreshadowing some of the painting movements that were to emerge in Europe, from Romanticism to Surrealism, not forgetting Impressionism and Expressionism, which is why he is often regarded as the father of contemporary art.

Goya was born on 30 March 1746 in Fuendetodos, a village in the province of Zaragoza in northeast Spain. To commemorate the 275th anniversary of the artist’s birth, B Vocal, a local a cappella singing group, conceived a show called Las Voces de Goya [Goya’s Voices] at the ZaragozaAuditorium. Combining theatre, dance, chamber music and multimedia projection, the show transported the audience back to the time of the artist. 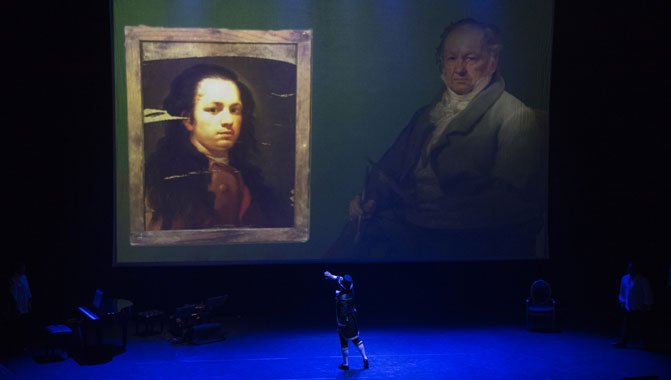 As a whole, 13 artists from the region, including dancers, musicians, actors and the B Vocal members performed live on stage, combining their talent in a music and theatre show representing Goya’s time, his origins, progression and life’s work.

DG Visuals, a multidisciplinary creative design studio for audiovisual events and installations, looked after the multimedia projection, including the creation and execution of the visual show, which integrated lighting and video, and also the creation of the video contents, and lighting design. For this purpose, it used a 10 x7 meter white cyclorama, with two laser projectors producing 18,000 lumens at a resolution of 1920x1200. Pandoras Box was at the very core of the multimedia show, connecting the audiovisual systems and controlling all the various aspects: projection, blending and lights. 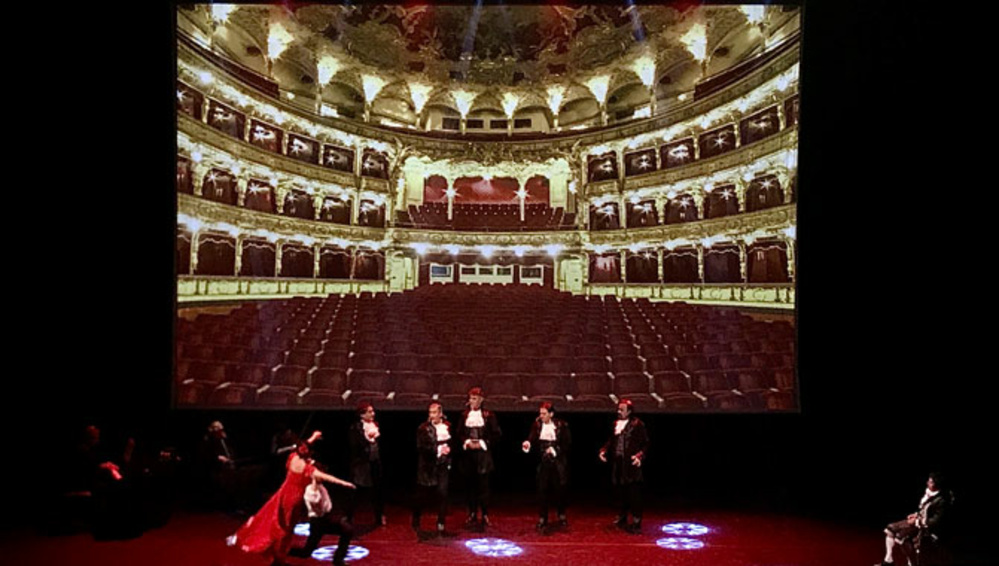 David Gálvez, director of DG Visuals, said: “We have been using Pandoras Box in our studio for quite some time now, mostly to design customized shows integrating lighting and video, interactive video mappings, extreme warping, sensor-based interactivity, video control from lighting consoles, audiovisual installations, and so on. One of the things we love about it is its sheer power and versatility, and the fact that you can control it from a lighting console, which gives us greater scope to create synchronised video and lighting shows.”

More specifically, for this show DG Visuals used Pandoras Box Manager, Player and Widget Designer. David Gálvez explained why they chose these multimedia processing solutions: “We needed a precise timeline for the live show with all the video backdrops, and it had to be controlled from a Grandma2 lighting console by Artnet. With Pandoras Box it is very easy to program and to adjust the geometry in order to ensure perfect synchronization.”

DG Visuals used two PCs, one equipped with Pandoras Box Manager and Widget Designer, and the other with two Pandoras Box Player licences so that they could control both projectors individually.

The Pandoras Box Manager allows us to design a complex timeline with its various cues, which can be put on pause. This means that during the parts of the show which are more improvised we can put a cue on pause if needs be while keeping the video in that cue on loop. Then whenever we want to continue the show, we put it on play and Pandoras Box Manager blends it to perfection into the next loop or video. And we can control the timeline entirely from the light console… playing, pausing, jumping to cues and opacity control,” clarified the director of DG Visuals. 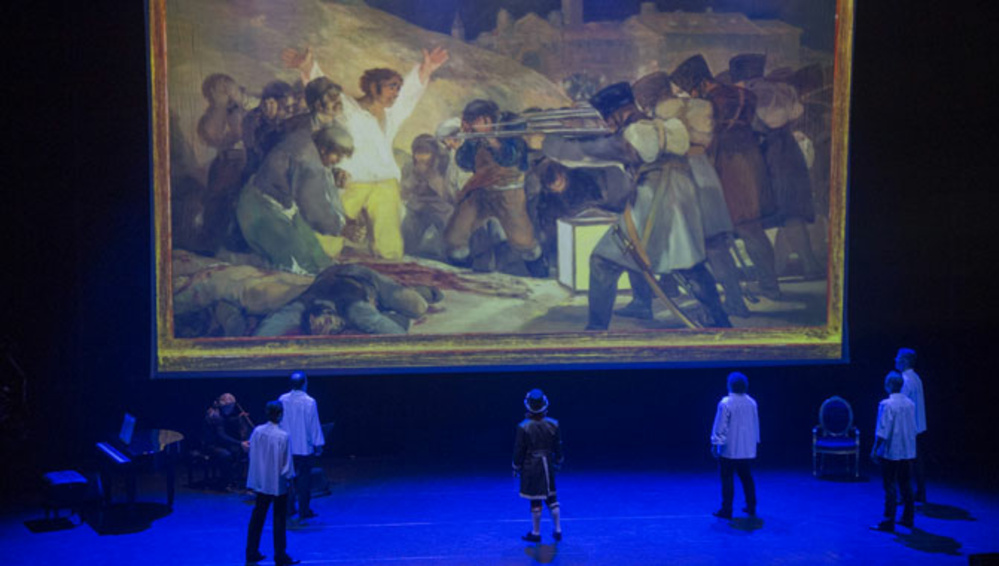 Christie Pandoras Box proved to be the ideal tool for the project. “Its powerful and accurate capacities for programming, playback and adjustments ensure a seamless integration between the visuals and the actors, dancers and musicians performing on stage. We are really happy with the end result, and so were the audience judging by their reaction. The show was flawless, and the performance of the Pandoras Box was all we could have asked for. It is a solution that gives you the confidence to push your limits,” David Gálvez concluded.

In turn, Augusto González Emperador, a member of B Vocal and coordinator of the show, said: “We were really delighted with the multimedia show created by DG Visuals. The quality was even better that we had hoped for. Everything went like a dream: the synchronisation was perfect and the impact on the audience was stunning. It is fantastic to see how visuals can generate such a powerful experience in this type of music shows.” 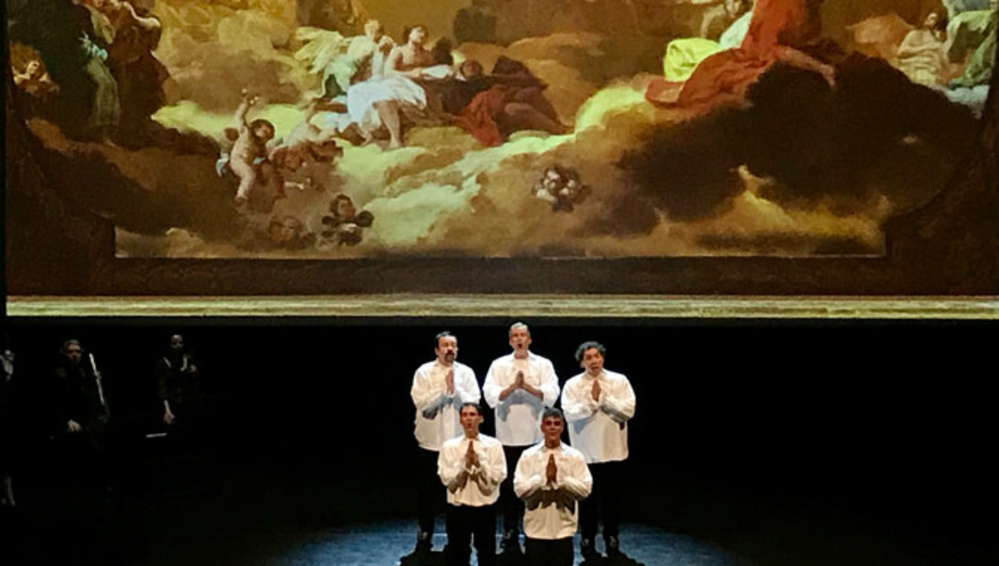 With the passing of the years, the Pandoras Box system has become a key element in helping the creators of shows and projection designers to incorporate extraordinary contents and visuals in all sorts of applications, including interactive installations, cultural events, leisure centres, theme parks and sporting events.