Interactive Installation at the Barbican in celebration of Sir Simon Rattle

Little did Elgar know, when his Enigma Variations debuted in London in 1899, what it would lead to - with technologies not yet imagined - over a century later in the same city.

It was Elgar’s 14 variations-dedicated by the composer to ‘my friends pictured within’, – that inspired Interlock: Friends Pictured Within, an interactive projection of 14 videos and audios, triggered by foot sensors as you step on them, as part of the Sir Simon Rattle celebrations at the Barbican in London, a leading international arts and learning centre. Brilliantly fitting for a theme around relationship, it involved collaborations from 150 participants making the content, the public who interact with it, and even the community around Christie Pandoras Box media servers which run the show; from blending and output to turning the projectors off after the staff have left for the night.

“One of the interesting things about the install is it shows how flexible Christie’s Pandoras Box is; people often associate the servers with huge, live events but it is endlessly modular and scalable to run pretty much any output, lighting or device or software. Really pleasing too was that the Barbican told us they found the training course set them up perfectly – 100 percent tailored and 100 percent used.” said James Belso, Christie Sales Manager.

The story started when world renowned conductor Sir Simon Rattle, announced his return to London after 15 years to become Music Director of the London Symphony Orchestra (LSO). It was international arts news; London started to prepare. “Two years ago Sir Nicholas Kenyon, Managing Director of the Barbican, asked me to come up with an idea involving Sir Simon Rattle becoming artist-in-association for the Barbican and the Guildhall School of Music & Drama. Sir Simon chose Elgar’s Variations for his first performance with the LSO so we linked part of our celebration to that,” explains Anna Wilson, Barbican Guildhall Creative Learning Producer. She picked Jonathan Munro as lead artist and described him as “A rare thing. Jonathan is multi-media artist, builds installations, can design, sculpt, loves working with sounds and visuals, a very good project manager and a computer expert who teaches children how to code and could put together the entire technical and artistic creation.”

The AV was the responsibility of Tim Bifield, Technical Manager. One of the first considerations was that the installation was in an enclosure, viewed from as little as a metre away. The solution was two Christie GS projectors, which were bright enough at 7.5k lumens even given the ambient light. And with laser phosphor, like many of the Christie projectors at the Barbican, they can run for longer periods without the cost of purchasing lamps. “The Image quality of the GS is great, even viewed standing so close. They were pretty much silent which was also perfect for the space, particularly as they are mounted on a very low ceiling,” commented Bifield.

The next challenge was blending; to maintain a good image quality, undistorted, given the width of the image at such short distance - and angled from the ceiling - needed two projectors. ”I had to make it appear seamlessly so the quality of the blend had to be the best it possibly can,” said Bifield. They decided to blend using Pandoras Box as content could be changed so easily. If, for example, someone wanted to put up a logo for the day, it could be dropped into an already built blend. Lines from both projectors had to be matched to within millimetres as viewing was from just a metre away. “I haven’t seen anything else that can get it that exact. Jonathan and I matched up the lines in Pandoras Box with the Warper Tool, which gives you higher levels of detail, and is often used for curved or 3D surfaces. As the wall is not flat and straight, having that ability meant we could adjust the image to match the curvature of the wall perfectly,” Bifield commented.

The Interlock installation used its own Apple Mac based software. Jonathan programmed the interactivity and all videos using MAX software to be triggered by corresponding foot sensors on the floor. Again, Pandoras Box features made Bifield’s life easier. “Instead of putting content though Pandoras Box we can plug a Mac or video or camera into the Pandoras Box as live input. Pandoras Box shows it exactly as on the screen of the Mac. Perfect. The good thing is there is no delay in the picture which is delivered in real time, so any audio would be perfectly in sync.”

The image was then soft-blended to match the colour and brightness at the join exactly. “Although the Edge blend initially took some time to get precise, after one or two installations, it became a really quick process, but still with a high level of detail. So on Interlock it showed how much I’d improved and how quick the edge blending can be on Pandoras Box! It’s very easy to use,” said Bifield.

The Wonders of Widget Designer

If you speak to anyone from the Pandoras Box community, they tend to rave - unbidden - about Widget Designer. Bifield is another fan. “Widget Designer gives me control of the projectors and content. I can make schedules and events to turn the projections on automatically to times I set. So at 8am each morning the projectors turn themselves on and at 11 p.m. at night turn themselves off so I don’t have to staff this part of the process.”

Full automation gives other advantages around the Barbican Centre. “If we have a commercial event running which needs to be turned off, with content changed and switched off at 4:00 p.m. and on at 6pm, I can programme it in seconds,” Bifield explains.

Bifield also praises the latest version, V6, which includes a Google-like search – making it easy to become self-sufficient without detailed coding knowledge. “Say you want to play content from 10:00 a.m., I would just write in the word ‘play’ and it comes up with suggestions. If I still have a question, the guys in Germany answer in 24 hours at most, so it is quite simple to do everything.” All the effects you would usually have to edit before the content is complete, can be left quite raw and then added, which gives you more opportunity to update on the fly not go back to editing stage.

“The Widget Designer constantly amazes me with what it can do. It can control anything you can think of in some way which is incredible,” concludes Bifield.

Bifield had relatively recently been on the Pandoras Box training in Cologne and said “One of the most impressive things was how much the staff clearly love the company. I’ve never been anywhere like it. Part of the reason the experience was so lovely was because everyone believed in the system so much they wanted others to enjoy it. It feels like a community.”

On a purely practical note, Bifield cites how the course was very specifically tailored to his needs.  “The facilities were great and Dave, the tutor, is a Pandoras Box user, so he was able to structure the course around answering our questions. All of the four days were incredibly productive.”

About Interlock: Friends Pictured Within

Interlock: Friends Pictured Within, is a modern day artistic response to the theme of friendship, produced by Barbican Guildhall Creative Learning, which helps people of all ages and backgrounds to access world-class arts for free.

The interactive multimedia installation is located in the foyers of the Barbican, a leading international arts and learning centre. It consists of an interactive projection of 14 videos around friendship, with 14 original audio tracks, triggered by foot sensors. These enable the audience to activate multiple variations at once, which interlock to form one larger composition. The installation was designed by artist Jonathan Munro in collaboration with composer Anna Meredith and musician and producer Jack Ross, plus over 150 community participants from London, and was created to help welcome conductor Sir Simon Rattle back to London. 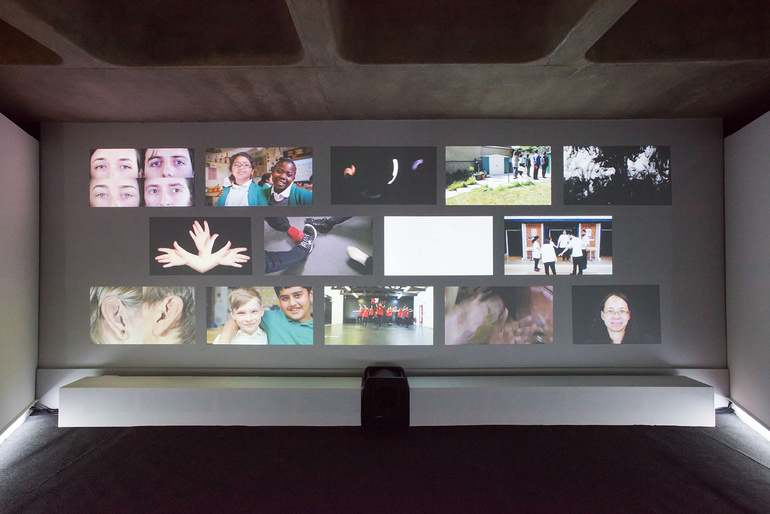 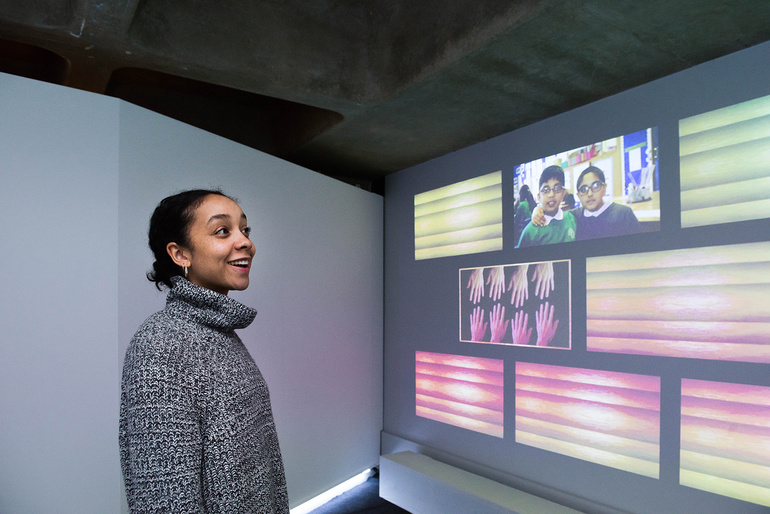 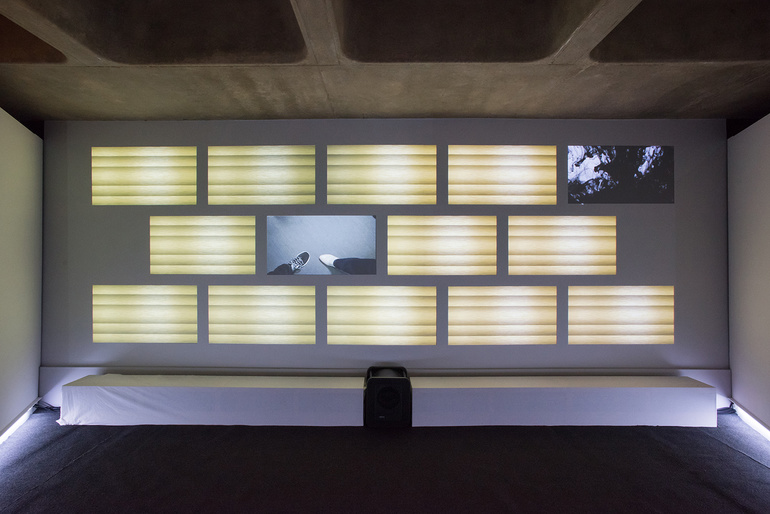 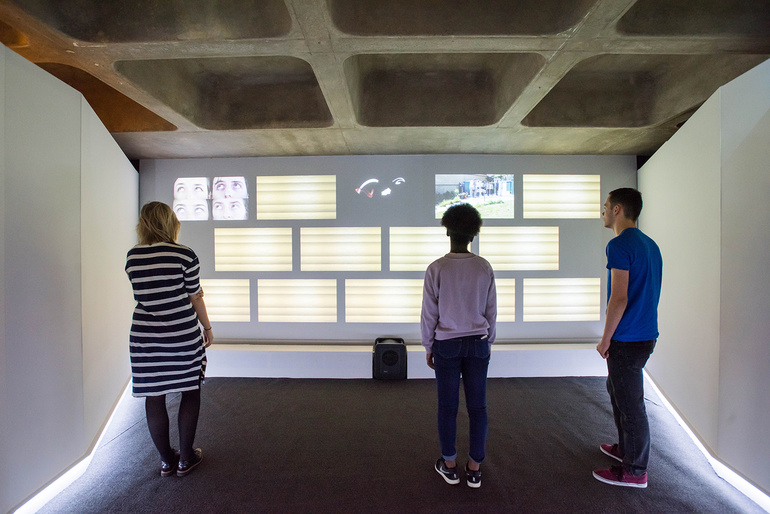 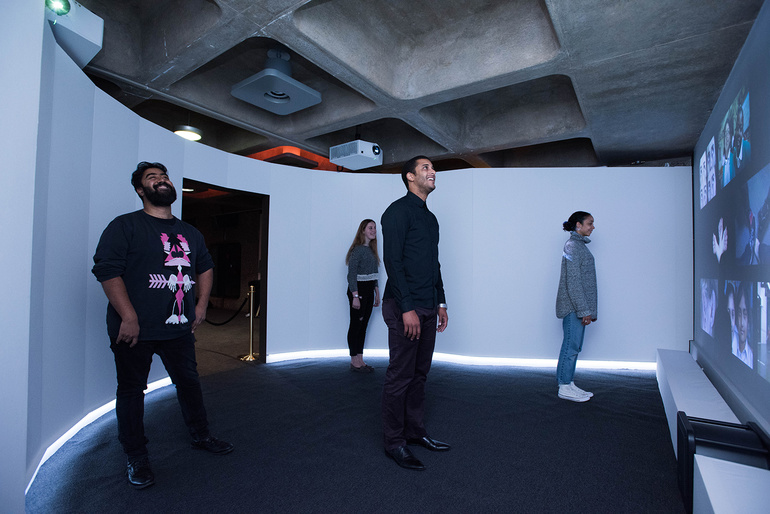 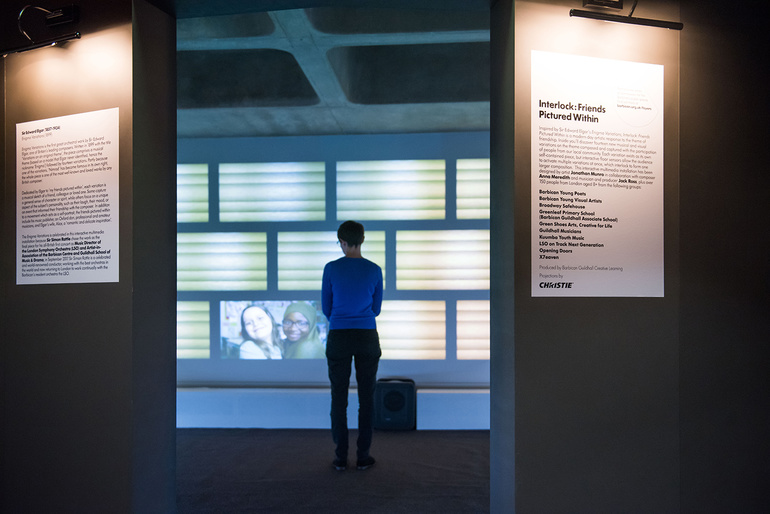 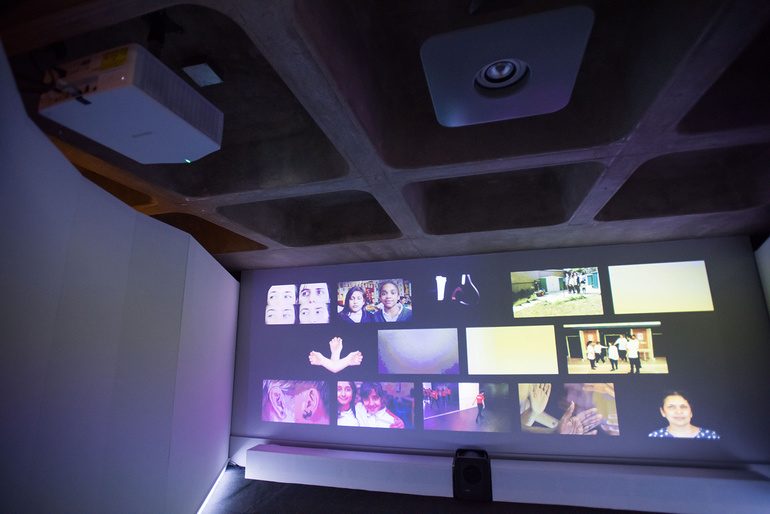 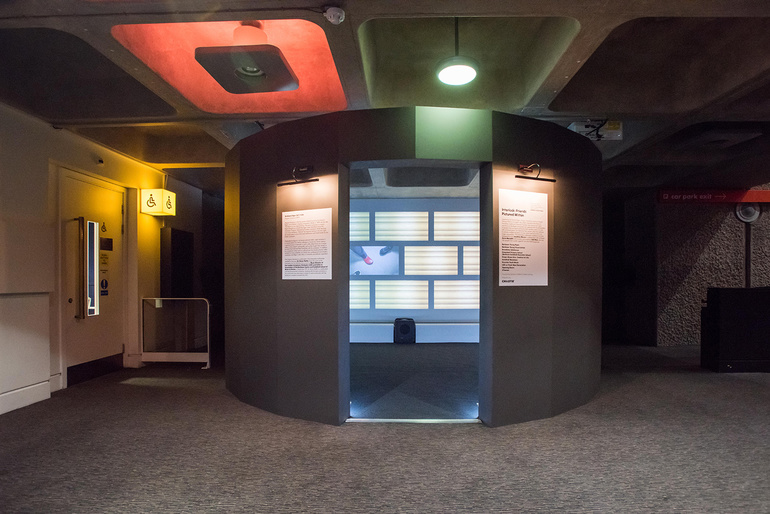 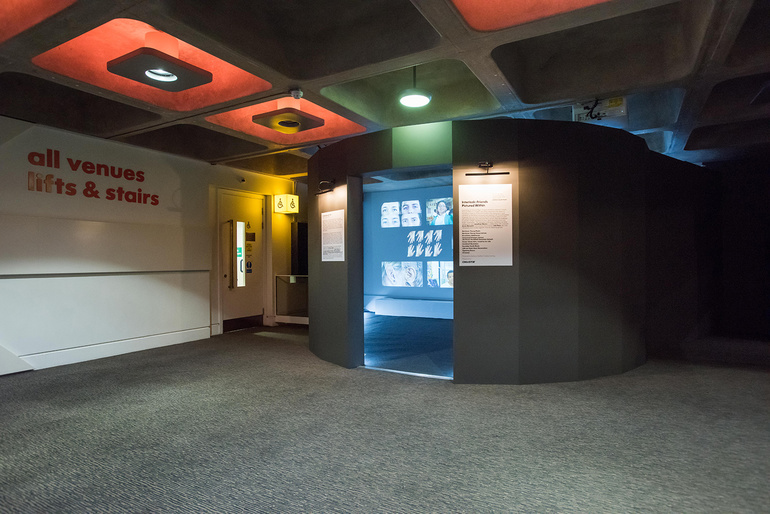